All girls dream of a magical first kiss…myself included. For years I waited and watched and wondered when “Prince Charming” would arrive and rescue me with a valiant horse and a tender kiss. What all those fairy tales seem to leave out is, well, reality.

It was a hot summer day that Mason and I decided to go watch a fireworks show over Kentucky Lake. The sun set beautifully as we walked across the bridge and nestled into our totable chairs. The show began and we were both mesmerized by the colors and shapes and flying sparks.

Let me pause here to say that I did not expect my first kiss to come this night. We had only been dating a few weeks and I’m a pretty slow moving gal. Plus, this whole “relationship” and “knowing who my future husband was” thing after the prayer journal meeting had been a little overwhelming, so I was looking forward to a calm, relaxing evening together. 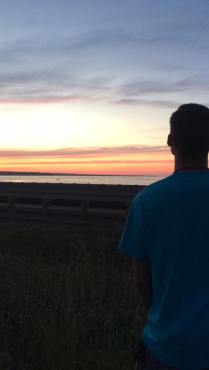 We stood up and moved to the railing for a better view of the show. The finale came and went and we stood chatting quietly in the midst of subtle lake waves and firework smoke. I remember gazing out onto the lake and hearing Mason’s words, “Hey, turn around for a sec.” I glanced around and was greeted by a kiss! After 21 years I had finally found my Prince Charming man!

He pulled away and smiled and I did too. It was a sweet night. But that wasn’t the end.

We began to collect our things to head back to the car when I realized my stomach was churning. My first kiss had made me so anxious and excited and I already had a track record of having a weak stomach. “Oh no…” I thought, “This CANNOT happen. Not now.”

I tried to pull myself together and regain stability, but it was too late. I ran to the railing just in time to vomit over the bridge and down, down, down into the lake.

Seriously. That was my worst nightmare. And it happened.

Seconds later, Mason came over and held my hair back as I continued to get sick. I think that’s when I knew he was a keeper. By that time, I was starting to feel better. He gathered all our stuff and we walked all the way back over the bridge basking in the embarrassment and hilarity of our first kiss story.

Fairy tales aren’t always pretty or predictable, but each one is special. If I learned nothing else that night, it’s this: even when life goes terribly wrong, God has a plan.

Despite the momentary setback, Mason and I continued to have a wonderful dating relationship. We enjoyed the challenge of balancing classwork and time together. Having the end goal of marriage in mind, our times together were very intentional. We prayed together, dreamed together, observed the ways each other responded to conflict and difficulty, and spent time with our respective families.

Looking back on it now, that was a time of deep spiritual and relational growth AND refining in my life. There’s nothing like seeing your flaws as hurt in another’s eyes to make you realize that you need a Savior. Daily. It also felt as if I was squeezing years of a relationship into a short period. But I didn’t understand why. In fact, we wouldn’t even consider marriage until Mason graduated, which was two years away. Right?

I will never forget that Monday evening in my dorm room. We sat on my futon, dreaming of the years ahead. That week had been difficult for me, I was learning to surrender to God in a whole new way. We celebrated the victories that we had prayed for and laughed without fear of what was to come. And then a question popped into my mind and out of my mouth as quickly as it came to me, “Hey, Mason, what if we got married next summer?” We both looked stunned. And confused. And then wondered why we hadn’t thought of it before.

Over the course of the next few minutes, we realized that EVERY one of our dreams and callings would be BETTER fulfilled if we went ahead and got married that upcoming summer. We felt a strong impression from the Lord that this was why He had made it so clear to us so soon, that THIS was why I felt like I had been through a crash course in dating. But we decided to pray and think on it for several days while we were apart for Thanksgiving break. Oh, and run the ideas by our families. If our sources of godly counsel disagreed, we would be very hesitant to move forward without their support.

To our surprise, our families had no hesitations and were in full support! Mason and I talked on the phone Thursday night. I remember not having many words except that I knew without a shadow of a doubt that we were supposed to get married that summer. He did too. We couldn’t explain it. All we knew is that when the Lord spoke, we had to obey. 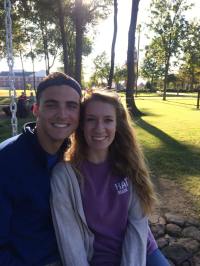 Of course I had a thousand questions after that phone call. When is he going to propose? How is he going to find a ring? Where? Is this really happening? I had no clue what would unfold just two days later. But I rested in the fact that my God was in control.

If you’re anything like I was, I was so impatient to find my Prince Charming and have “true love’s kiss.” I sometimes felt like life was dragging on, that I was getting too old, that I didn’t have “this” or “that” that guys were looking for. I had faithfully prayed for my husband for years with no sight of his arrival.

But friends, God DOES have a plan. That has become so overwhelmingly clear to me now, but when I was in it, I couldn’t see it. I started dating for the first time EVER and was engaged 5 months later. I understand that is CRAZY, but I want to remind you not to grow impatient. HIS timing is not our timing. HIS ways are not our ways.Don’t try to fit your story into the tiny box of “worldly romance.” Let God blow your socks off with His plan that is SO MUCH BETTER, no matter what or when it is.

Well, you’ll have to wait to find out. Until next time.