“Marina, on March 15 of this year, God told me you were going to be my wife.”

I stared blankly at the man in front of me, trying to process the 17 words I had never dreamed of hearing. We had only been dating for two weeks. Memories, confusion, and, oddly, peace flashed before me as I struggled to find words to answer.

It was Tuesday evening when I first received a phone call from Mason Shelton. His country-twanged voice explained that he knew me from our campus ministry and had heard I needed a date to our upcoming spring formal (thanks to my roommate). I was caught off guard by his request, but had no reason to say no, so I agreed. After all, I didn’t even know the guy. He was immediately excited and ended up asking me on two more dates before the night was up.

Mason was a very interesting guy, but definitely not my type. He always sported a buzz cut, he loved to hunt and fish, wore clothing that was entirely too large for him, oh, and did I mention his country accent? I put aside my externally judgmental ways in time for our first “outing.” We went to see Lego Batman. Romantic, I know. Mason fell asleep during the movie.

I’ll spare you the details of the rest of our date, but it was AWFUL. Come to find out, Mason was on high-powered pain medicine for kidney stones he was trying to pass. He also was carrying a strainer around in his pocket to see if the stones “came out” every time he used the bathroom. All of these details he shared with me. On our first date. At least I understood why he was taking so long in the bathroom. 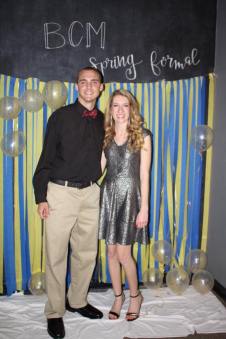 After that evening, I decided to avoid Mason like the plague. We went to the formal together. He gave me flowers and a note thanking me for my friendship. I barely gave him the time of day. He invited me to meet his parents, go bowling, go to Applebees, go to campus events, the list went on and on. I finally told the poor boy I wasn’t interested. Certainly that would be the end of it. I was wrong.

Mason pursued me in a way I had never seen before. I had given up cookies for lent, so he baked me a plate of homemade cookies and gave them to me on Easter. He took me on a surprise outing to the Kentucky Dam Marina because he had discovered that was my namesake. Later on in the semester, he took me out on his boat to watch the sunset. He intrigued me, he listened to me, and he cared for me although I had given him nothing in return.

For three full months, I denied any affection for him. He even asked me to be his girlfriend (he termed it, “teammate) and I declined. He just wasn’t the type of guy I pictured myself with. Sure, Mason loved Jesus and studied the Word more than any man I knew. Sure, he was patient, kind, humble, hard-working, and handsome. But somehow I had convinced myself he wasn’t for me. I wrote him a letter saying just that, but never ended up giving it to him.

Our friendship slowly grew and I began admiring Mason more and more. He was two years younger than me, but He challenged me in my faith in ways no one else ever had. He was intelligent, he had already started and sold a business, he was well-loved by his church and community, and he had his own boat! I didn’t quite know what to do with this admiration though because I was about to leave for a study abroad experience in Europe that summer. Plus, I had already turned him down.

The day before I left for Europe, he and I exchanged gifts. Little did we know, we exchanged the same gift: a collection of notes for each of the 40 days we would be apart. Yes, 40 days. God’s time period of testing. We left with an agreement to only communicate once a week.

I wanted so badly to return from Europe with an answer as to whether or not I should pursue a relationship with this boy. But weighing all aspects of the decision just frustrated me more. So I decided to pray.

Almost every afternoon I was in Scotland I would grab my Bible and head for the open country outside our house. I would stay outside for hours—talking, praying, thinking, reading. By my fourth week away, I gave up on hearing a direct answer from God. After all, God doesn’t often respond that way. But one day, a particular phrase from the Lord was impressed upon my spirit in relation to Mason. “Marina,” he said, “Mason is supposed to be a gift to you. You can choose to ignore or reject that gift, but I just want you to know he will be a source of encouragement, peace, and joy to you.”

I kept reading Mason’s notes every day and on the last day he provided a key to decipher a code hidden within the notes. It spelled Proverbs 3:15, “She is more precious than rubies, nothing you desire can compare to her.” I cried. But the code had a twist. Mason clearly said in the letter that this verse would mean more to me later than it did then. I just kind of blew past that part of the letter, having no clue how it would be important later on.

I headed back to the States soon after that and Mason was there to greet me with my family. We stayed in a hotel in Nashville that night and the room my parents booked for Mason and my dad to stay in—to their surprise—only had one bed. It was there, just the two of them, with PJs on, the lights off, and tucked into bed that Mason asked my dad if he could date me. I wish I could have been a fly on the wall of that conversation.

A few days later, Mason and I met up for a picnic halfway between our homes. It was there we officially began dating. June 20.

It was only a few days later that Mason called me excited about a strong calling he had felt to the ministry. It brought him to tears. He had already been working at his church, but knew that God wanted to use him to preach His Word for the rest of his life.

Around that same time, God was speaking to my heart and I began to get the sense that Mason’s life calling was the very same calling I felt. But I sort of shrugged it off and headed to Western Kentucky to work a girl’s retreat.

I was driving my parent’s new car that they had so graciously let me borrow when on the last few miles of the Western Kentucky Parkway, a deer jumped out of nowhere. It hit my car head on. I was devastated. The only phrase I could remember that night was one Mason often told me. “When something big happens, tell God, ‘You have my attention!’” And he did.

The next morning I went to the retreat and led my session. Then I told the girls to spend a few minutes outside in prayer. I joined them. I don’t think I got a single word of prayer out before the Lord clearly and repeatedly impressed upon me, “Marina, he [Mason] is supposed to be your partner, in life and in ministry, and western Kentucky will be a part of that.” I sat there for 15 minutes with the same phrase impressed upon me over and over again, probably so that I wouldn’t deny it.

I met Mason the next morning for breakfast with absolutely no idea about what I was going to say to him. We had only been dating a few weeks, how could I sit here and tell him that God had made it clear he was my future husband?

We both sat and began talking about Mason’s recent calling to ministry and he asked me how I felt about it. How did I feel about it? I couldn’t speak. I stumbled over my words for a good two minutes before he stopped me: “Hold on a second,” He said. He quickly got up and left the table. He was gone. A few seconds later he returned with a book in his hand and flipped it open quickly. It was his prayer journal. He found what appeared to be the right page, looked down at the page, up at me, and began:

“Marina, on March 15 of this year, God told me you were going to be my wife.”

That was the day that Proverbs 3:15 meant more to me. Three-fifteen, March 15th, was the day the Lord clearly showed Mason: “She is the one I have picked out for you.” If you remember back, I didn’t like him. I put up a fight, I thought he was weird. It was then that Mason told his mom and God both, “Listen, I am done with her. It’s not worth my time.” But the Lord spoke and confirmed that I was the one.

At that time, people (myself included) were under the impression that Mason liked me so much that he wasn’t going to let me go. People gave him props for not giving up on what he wanted. They had no idea that he was actually pursuing me because he was pursuing the guidance of God. Oh how sweet it was to see God’s faithfulness unfold as I unexplainably fell in love with the man of my dreams.

After the calling to ministry the Lord had placed upon Mason during the summer, he responded adamantly to the Lord: “Just as you have given me a bride, I will prepare yours for the day Jesus comes back.” And just as God has been faithful to us, we will be faithful to Him.

God has brought me and Mason together in the same way that God has brought Christ and the Church together. The faithful pursuit, the call, the patience, the response, the attention-grabbers, the revelations, the fellowship… all of those are ways that salvation is played out.

Just as both of us have sincerely thought of the other as a “gift,” I want you to know that Jesus is a “gift” to you. Because of the sins of man, we are separated from God. In God’s faithful pursuit, he sent his Son, Jesus, as the payment sacrifice needed to wash away our sins. There is forgiveness with the blood of Jesus. But it takes acceptance of that gift on your part. A whole heart in devoted surrender to God. If you haven’t ever made that commitment, I urge you to do so today. Just as every relationship is built on a commitment, you can make that commitment to God. Oh what a beautiful picture that is!

But that wasn’t the end of our story. In fact, it was just the beginning.